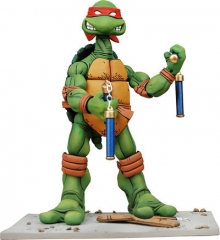 As I picked up my weekly stash at my local comic shop this evening, I saw a beautiful thing on one of the toy racks. It was a pair of Teenage Mutant Ninja Turtles action figures, Leonardo and Michelangelo to be exact. “But Augiewan…” you say, “there have been so many TMNT figures to date, why on Earth would that excite you?”. It’s simple. These are the first ones that actually look like the original comics from Eastman/Laird. Those years in the 80’s were the “golden years” of comic/toy culture for me and I haven’t been able to swallow any of the mass-market TMNT stuff that has come out since.

But these figure look perfect! They even have crazy articulation so you can pose them in all your favorite “let’s get ready to rumble” stances. So I’ve scrounged around a few eCom sites for some stock images and picked up a few more from a post on Toysrevil’s site (I can’t believe I missed his post 2 MONTH ago!)

The first wave of four figures of course consists of Leonardo (with katana), Michelangelo (with nunchucks), Raphael (with sai), and Donatello (with bo staff). After chatting about them with the owner of the comic shop, I learned that the second wave would be some of the supporting cast but then he brought up the third wave and I got really excited. It’s to be the four boys again, but this time in classic black & white! I MUST have those…

So anyway, if you’re looking to pick these up the first wave comes individually packed or as a box set. The box set does not come with the diorama bases, so I have no idea why anyone would choose it over the singles unless they’re evil and want to display them unopened. Here are some images followed by some places you can order them…