Or is it the other way around?

I’ve been meaning to post about the limited edition bottles that Jones Soda have been producing in partnership with Dark Horse Comics for quite some time now, but just haven’t gotten around to it until now. Which stinks because one of the two sets they did (The Goon) are now sold out. The set that is still around is based on the comic series Emily the Strange. The 6-pack contains a variety of different sodas, each with its own Emily the Strange label… 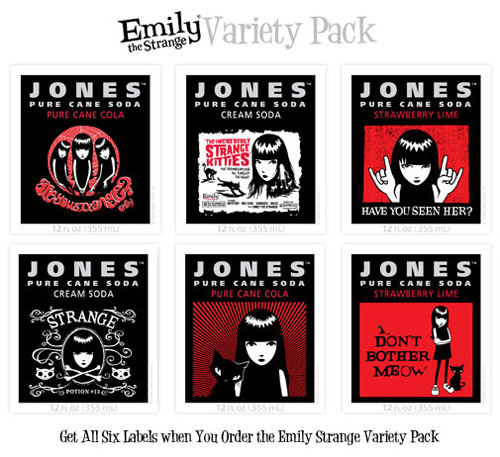 The Jones Soda site says the following:
Emily’s not your average thirteen-year-old girl. Pink is her worst nightmare . . . she wears the same black dress every day. She loves math and science. Her best friends are her four BLACK CATS! She’s into old rock and punk, but also digs newer bands like My Chemical Romance (BTW, Gerard Way is featured in her Dark Horse comic book, “Revenge at Last.”) Emily is so anticool she’s cool . . . A subculture of one, and a follower of no one but herself.

Designers, including Jean-Paul Gaultier, Valentino, and Marc Jacobs, have paid tribute to her, but she doesn’t care! Emily wants you to be yourself, think for yourself, and DO IT YOURSELF. There’s nothing more boring to her than copying everyone else. Emily is the link to the Stranger in us all.

When asked what she thought about her delicious new soda pops from Jones, the leader in creative DIY labels, Emily rolled her eyes and coolly responded, “Whatever.”

If you’re curious what the labels looked like for the Goon, you can see them here…

One comment to “Emily the Strange Pushes Jones Soda”