As is obvious by the date of the last post, I’ve been a bit lax with the updates. Shortly before getting laid-off I got some new toys from Tenacious Toys (great folks by the way) and still haven’t gotten around to posting about them or even OPENING them for that matter. I got Bulletto, the latest in the Moofia line as well as the first series of Doktor A’s Mechtorians minis. They look great in their packaging and I know they will look even better on my shelf once I have a new office to place them in.

But the thing that got me to at least post something today was my getting an e-mail alert from eBay regarding a search watch I have set up. There is currently a Mega GIR auction on eBay, and unlike most of the ones I tend to see, this one doesn’t have an insane starting bid. (Update: Here’s a link to see if there are any current auctions for a Mega Gir 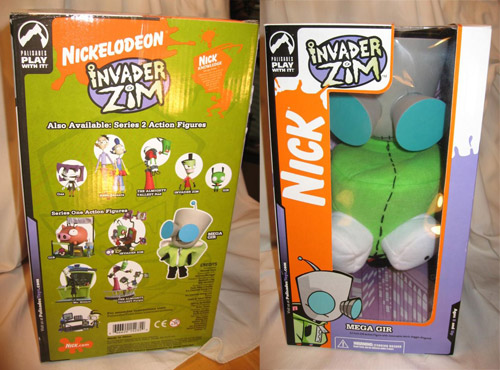 I’ll be honest, under normal circumstances I would not be talking about this auction because I’d be hoping to snag it myself. But since I’m not in a situation to be spending money on toys right now, I figured you all might like the chance to land one. These were produced but never officially released before Palisades Toys went out of business. These were bought up in bulk with all of there other stock (old and new) and have been slowly finding there way to light.

If you land it, send some pictures once you open it!