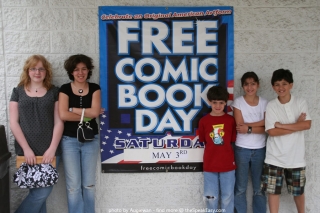 Today was the 2008 Free Comic Book Day, and I spent it with my kids at BuyMeToys.com as I have every year (but the one I missed) since 2004 when it all began. This is a really fun day for the kids and my oldest daughter’s best friend has now joined us for the past two years.

I’ve heard of other comic shops having really limited selections and only giving one or two copies away to each person, but BMT has consistently had a huge selection of FCBD comics and they give out five issues to each visitor. It’s definitely worth the trip if you live anywhere even close to Mishawaka, IN.

I haven’t read them yet except for the IronHide Tom book which my daughter picked up at a previous FCBD and I loved. I had to have my own copy when I saw they still had one.

So here you are, the couple pictures I snapped while we were there…